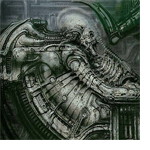 In space, no one can hear you podcast.

This week we tackle another in a long series of “Eric’s Missed Classics”, Ridley Scott’s Alien. We talk about some poorly thought out edits, Ridley Scott’s sleepytime hold over Jason and fantastic “I told you so” moments in history. We debate the definition of what is considered a “cult” movie and wonder if John Hurt survives any of his roles. Finally, Eric outs himself. It’s a very special episode. Do you need any more napkins?