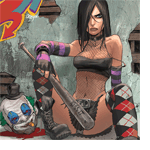 This week on a disappointed and disappointing episode, the guys review Hack/Slash, the humorous horror comic from writer Tim Seeley and Devil’s Due. Eric and Jason also discuss memorable tales of vomit, children’s cereal, pies and video games. They also wonder about The Three Stooges’ tax returns and if Final Crisis was just all about Batman smoking pot. There’s also a turn for the semi-serious as they reminisce about good old fashioned Old School Comic Storytelling versus today’s comics where not much happens.