Episode 254: Amazon Women on the Moon 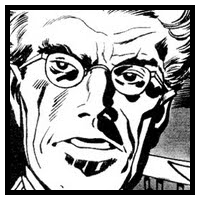 Episode 255: In the Days of the Mob
After leaving Marvel Comics at the end of the 1960s, Jack Kirby came to DC. One of his first projects was the black and white magazine IN THE DAYS OF THE MOB, which featured stories of organized crime in the 1930s in the style of the TV series “The Untouchables” and “The Godfather” movies.

Music by Man or Astroman? and Woody Guthrie