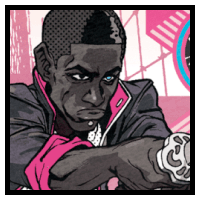 Prince of Cats is the B side to Shakespeare’s Romeo and Juliet, played at an eighties block party in a NY where underground sword dueling blossomed alongside hip-hop, punk, disco and no wave. It’s the story of the minor players with Tybalt at the center. Like Shakespeare’s originals, Prince of Cats implements various formalist restraints. The definitive printing of Ronald Wimberly’s critically acclaimed first work, presented as intended for the first time.

Music by The Melvins and Van Halen