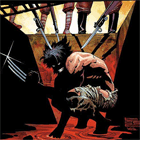 You guys go see the movie, I’ll stick to the comics to not give a shit about his origins.

On this week’s episode, we lay down the man-love for both Eduardo Risso and Brian K. Vaughan as we review their recent Wolverine comic, Logan. We go to battle, as Jason loves it, and I don’t dig it at all. I even go so far as to defend Chris Claremont, just two episodes after we spent nearly an hour bashing the guy’s career. Also: other stuff, and I’m probably a dick to people. Good times!