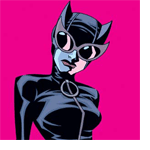 Longest Episode Ever? I think so. It sure feels like it.

This week on a less than purrfect episode of Gutter Trash, we review Darwyn Cooke’s noir Catwoman graphic novel, Selina’s Big Score. We also discuss the odd celebrity appeal of Dave Mustaine and Scott Ian, and I do a piss-poor Patrick Warburton impression while Jason and I reminisce over The Tick cartoon. Later on, I get a work related phone call, and Jason prepares for a big day.

Music by Legbone, Black Wolf Fight and Guided By Voices.