Episode 69: Batman – The Cat and The Bat 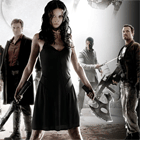 A grueling exercise in endurance.

We did it! We broke 90 minutes and did it with no music break! To be fair, we didn’t just review a movie, we reviewed 16 hours of Joss Whedon’s television and film epic called Serenity. This episode is also twice as filthy and inappropriate as I had hoped Episode 69 was going to be. We discuss fake high schools, Iron Maiden’s history, hot young tail, the curse of Sammy Hagar, local bands, Pat Kain, and are surprised to discover that TV is actually good.