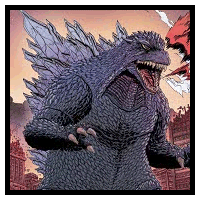 Episode 263: Godzilla – The Half-Century War
A young Japanese soldier is part of the team that faces the monstrous Godzilla during his first attack on Tokyo. He then spends the next 50 years chasing The King of Monsters and the other creatures that arise to threaten the world.

Music by Man or Astroman? and Fu Manchu