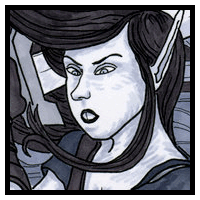 Strange inter-dimensional creatures live in the ancient lands of the Northern Mountains, where electronic and engine powered machinery is rendered inoperable. The city is a police state where the military subjects its citizens to experiments that turn memory and identity into malleable, political tools. While one woman wreaks havoc against the totalitarian state in revenge for what they’d done to her, two lovers wander through the Northern Mountains trying to distinguish between real and false memories.

Music by Man or Astroman?, Morcheeba, and Dead Kennedys