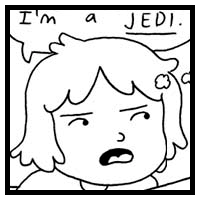 Liz Prince wasn’t a girly girl, dressing in pink tutus or playing Pretty Pretty Princess. But she wasn’t exactly one of the guys either, as she quickly learned when her Little League baseball coach exiled her to the outfield. Liz was somewhere in the middle, and Tomboy is the story of her struggle to find the place where she belonged.

Music by The Melvins and Green Day