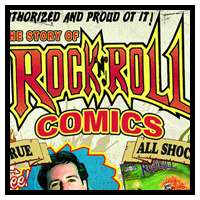 This documentary charts the short and controversial life of publisher Todd Loren, whose scandalous series of unauthorized comic book biographies of rock stars enraged and sometimes charmed his subjects, provoked numerous lawsuit threats from the likes of Bon Jovi, Guns N Roses and Skid Row, and eventually led to a landmark First Amendment case, all before he was savagely murdered in 1992.

Music by The Melvins and Alabama Shakes