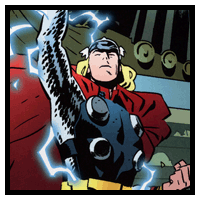 Thrill as Thor battles robots the size of cities! Gasp as he tames the mightiest sea creatures! Swoon as he rescues damsels from the vilest villains! It’s Thor as you’ve never seen him, as the god of thunder tests his might against the Sub-Mariner, learns why he was banished from Asgard, battles Fin Fang Foom, takes on raging robots, and fights side-by-side with Iron Man for the very first time!

Music by The Melvins and Amon Amarth