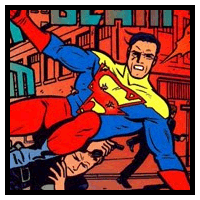 In each of their respective universes, Superman and Madman are involved in scientific experiments, the results of which propel the unsuspecting superbeings into one another’s world. The only thing is, each takes half of the other with him — creating two confused heroes and one big Hullabaloo! It’s wackier than red kryptonite and more bizarre than Bizarro when two worlds get an even stranger visitor from another planet — Supermadman!

Music by The Melvins and David Bowie