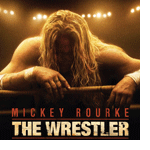 This week on an episode that thought Mickey Rourke made his comeback with Sin City, Eric and Jason invite indie filmmaker/friend/roommate Matt Brassfield along to review the new Darren Aronofsky film, The Wrestler and wrestling in general. They also discuss why no one should ever listen to this show, and the mind-blowing awesomeness of a time-traveling Michael Bay. Eric and Jason jump to Rob Liefeld’s defense, talk about super-villains and may or may not want some pot.

P.S. Please remember to leave us an iTunes review, Pat.

You can find Matt Brassfield on the internet at Bloodline Video.