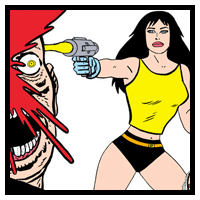 Episode 251: Fatima – The Blood Spinners
A drug called ‘spin’ offers the wildest trip imaginable, followed by its users’ inevitable, rapid deterioration into undead flesh eaters. Despite the side effect, the drug is so popular that the human population is dying out! With no cure to be found, the beautiful, lovesick Fatima may be the only thing standing between the survivors and the apocalypse.

Music by Man or Astroman? and Dope