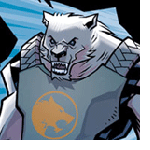 Hey all, welcome to the first episode of Gutter Trash! It’s not exactly the first episode we were hoping for, but it’s probably the one we deserve. For our inaugural show, we review Robert Kirkman’s The Astounding Wolf-Man vol. 1, and Christopher Coppola’s G-Men From Hell.

We’ll get better, we promise.

Check out Jason’s site and Eric’s site and blog.
Email The Show, and individually: Eric or Jason.

Eric and Jason get together for the first time to talk comics, artists and to layout plans for the first official episode in this heavily edited, unfocused, rambly and offensive preview of Gutter Trash.

Check out Jason’s site and Eric’s site and blog.
Email The Show, and individually: Eric or Jason.

Eric Shonborn is a gigantic hairy man and professional illustrator/graphic artist born and raised in Dayton, Ohio. He is also an unprofessional independent cartoonist, having written and drawn numerous comic books. Eric’s facial hair never looks as good as the drawing.

Jason Young is the manager of Maverick’s, a comic shop located in Dayton, Ohio, where Jason was also born and raised (Maverick’s, not Dayton). Aside from his highly successful career, Jason is also an independent cartoonist, having written and drawn numerous comics (such as Veggie Dog Saturn) under his banner company, Buyer Beware Comics. Jason is vegetarian, but likes to slaughter animals to even the balance.

Eric and Jason started Gutter Trash mostly due to The Crankcast. They love that damn show so much, they decided to rip it off. They only hope it’s a fraction as good. Gutter Trash is dedicated to comic books and movies, and occasionally music, television and any other forms of trash entertainment that gets them excited. They also enjoy babbling about nothing.

Check out Jason’s site at buyerbewarecomics.blogspot.com.

Eric can be found at www.shonborn.net.