Episode 261: The Other Side 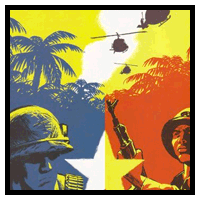 Episode 261: The Other Side
The parallel stories of an American soldier, PFC Bill Everette, and a North Vietnamese soldier, Vo Binh Dai, as they join their respective armies during The Vietnam War. As they fight for their countries, the horror of the war wears upon their soul and sanity.

Music by Man or Astroman? and Metallica