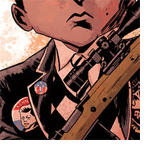 This week on a pinko commie scum episode of Gutter Trash, Jason crosses the border and helps me review Umbrella Academy Vol. 2: Dallas by Gerard Way and Gabriel Ba. We mourn the passing of Ronnie James Dio and Frank Frazetta, and we mourn the lack of acting ability of Scarlet Johansson, but celebrate her hotness. Jason doesn’t really talk about his trip to Canada that much, but I may not have let him. Don’t know. And finally, yes, I have seen one of those before.